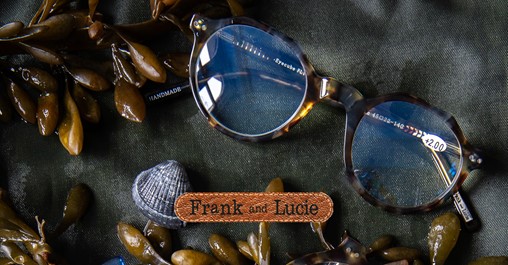 New collection Essentials – Frank and Lucie reading glasses Atlantis Dream For this season, Frank and Lucie Essentials is inspired by the hope for a better future. To start with, a nice summer, a Summer Bliss, with the carefree atmosphere of earlier times. They long for an apparently lost paradise, a new world, which the brand tried to visualize in their latest collection. This month, the brand would like to showcase their frames in the mysterious colour Atlantis Dream, which sees many deep ocean influences. Beautiful types of seaweed tones, cool, chic blues and a lot of coral, wood and natural beads that match their luxurious spectacle necklaces. In addition to the new colours of acetate and current models, such as model Eyefresh, Frank and Lucie Essentials has also added +0 to the versions. The +0 does have the blue light filter, which makes the glasses perfect as screen glasses, but no reading power. As always, the exclusive soft pouches complete the collection. The reading glasses are made of acetate and all have an excellent blue light filter. The Reading Company delivers worldwide and is known as a very reliable partner. About Frank and Lucie Frank and Lucie Seemore are originally from London. But now they live outside. Away from the hectic, more back to real life as they call it. They moved into a small town by the sea. With a museum, theater, good restaurants, book shops and cozy terraces, they feel perfectly at ease. Because Frank and Lucie are no longer twenty, but in their heads they are young and enterprising. Frank is a designer of eyeglasses. For many companies, he invented all kinds of top models, but nobody needs to know that. And now he has made a beautiful collection of reading glasses for his wife Lucie, because Lucie complained about the offer, and not only she, her friends also complained. When Frank was busy, he realized that it is even more fun to design a collection of reading glasses that he can also wear. The material is very important to Frank; the choice for the rich acetate was therefore made quickly. He drew on his years of experience as a designer for the models. That is how he came to the number of models that are now available. He likes vintage, but never too fussy, always the atmosphere of the past is combined with the technology of tomorrow. Read more about Frank and Lucie on TEF Magazine. After being a freelance eyewear designer since 1999, TEF founder Maarten Weidema now solely writes about his fellow designers in the optical industry. His passionate mission is to promote independent eyewear to the international optical arena, backed up by a large group of bloggers and journalists from all over the world. He has recently been awarded "International Optical Personality of the Year", "Leading Innovator in Optical Social Media Marketing", "Social Media Marketing Company of the Year" and received several awards for "best eyewear blog" for his efforts to promote independent eyewear to a community of 517.000 eyecare professionals.